About photobombing, flower beards and the fall of genders 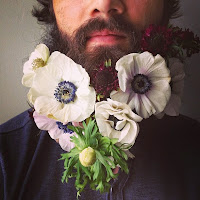 This the period of selfies. I used to take pictures of myself everyday in 2005 and my friends used to call me a narcissist; now Facebook, WhatsUp etc. are invaded by photos of people smiling, eating, mainly posing, trying to show the world what a fabulous interesting life they have got and how good looking -or at least not bad looking- they are. All this is accompanied by dozens of pictures of kids, dishes, places, pets, shoes. It is a generation that needs continuous confirmations, a generation that craves appearing cool. Sometimes it is fun, sometimes it is boring. When it is too much, it is too much.
Sometimes, though, posting a picture of yourself can be gracious and part of a viral movement that somehow manages to  spread unconsciously a subtle message. It’s the case of one of the latest trend that sees men embellishing their beards with flowers. A part from the fact that some of the photos are very pretty (and their subjects), this concept suggests the idea that genders are more fluid now, less divided. Men are not afraid to wear flowers anymore. Not even in their masculine beards. Transsexuals are not to wear beards. Some gays are more masculine than some heterosexuals I know and being bi-sexual is considered not just normal but actually clever. Thank God this is the trend because the division between genders had became really boring.
illustrations
Lascia un commento
648