It’s time for some wall clocks 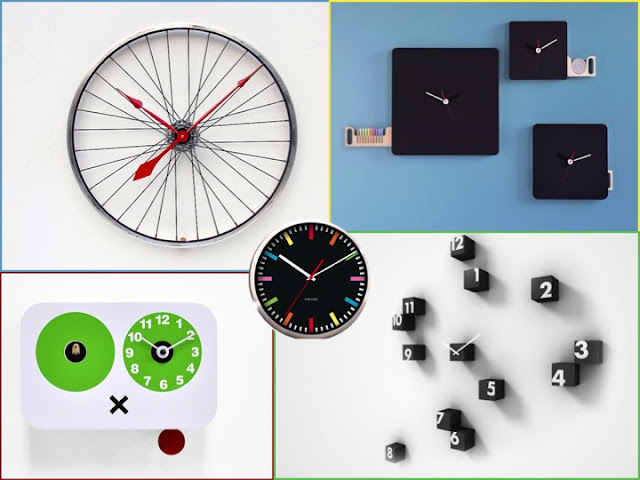 Time is going fast and it’s about time to have a fun time watching the time.
My favorite is the green cuckoo clock, the Cucchino Green by Barbero Design, made in Italy. The funkiest has to be the black Rainbow produced by Karlsson, a Dutch brand that sells a lot of wicked clocks at good prices. The most useful, without a doubt, is the chalkboard clock Tabla by Enrico Azzimonti for Diamantini e Domeniconi with a hidden sliding drawer containing chalk and a rubber (check their website for some more cool cuckoo clocks, especially Icona). The most elegant must be the Rnd Time by Rnd Lab, where Rnd stands for ‘random’ because you can randomly hang the numbers on the wall as you like. The one that goes with any style and is the best for the environment is the Recycle Bike Wheel clock from Pixelthis.
I have to be honest though, it was very difficult to pin down only 5 clocks, at some point I had to make a decision because I was getting kind of obsessed with clocks and I saw many I like (and also because otherwise this post would have been finished next Christmas).
clocks
Leave a comment
854