Being married to an Englishman means having at least 30 different little jars of herbs and spices in the kitchen (can someone tell me what you do with asafoetida?). Due to their multiethnic society the British have developed a taste for spicy food and have a cuisine with many influences from every corner of the world. The little jars were previously displayed on two low shelves within Giulio’s reach, so Alex decided to build some tiny shelves to host his treasure trove (allowing Giulio to discover the delights of hot chili powder in rather more conventional ways). He bought a L shaped (4,5 x 4,5 in our case) piece of wood from a DIY shop, painted it white and cut it to measure. He then attached the little shelves to the wall screwing them in with the drill. It is was a very clever, simple, cheap idea that looks great. Just don’t put the shelves up on where little baby hands can reach the Raz El Hanout, whatever that is. 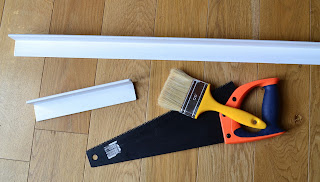