by Elena Giavarini
in DIY

I have started the week with a smile on my face having spent a nice lazy weekend with some old friends.
On Saturday my friend Stefano -a cocktail bar manager who recently moved back to Rome after over 10 years between London and Dubai- organized an intimate cocktail party on his terrace and he spent all night making some wonderful cocktails for us. Can you think of anything better of chatting with the people you love and sipping watermelon martinis (amongst the others) on a warm summer Roman night? On Sunday we were invited by some other friends, Stesi and Marzia, to eat a very tasty American style BBQ in his lovely garden. As soon as I arrived I noticed that their house was looking much better organized and not just because they had tidied it up: it was evident the effort they had made to make the place prettier, they had also started to think about how to display objects and colours. I was really chuffed when Marzia said that she was inspired by my blog. It is the positive comments more than the growing number of visitors that make it worth it.
Today I want to speak about a simple clever idea by The Painted House that I would like to have. It is a paint roller with two rolls, one is a sponge that collects the paint and the other is a stamp that imprints the pattern onto the wall. It is a valid alternative to wallpaper, it doesn’t cost much, it seems easy to use,  it can be used on different materials and unlike  wallpaper it allows you to change your mind more often, you can just paint it over. I wanted to try it on my entryway but I don’t have the time at the moment, when I do, I’ll post some pics.
The idea is original but at least 100 years old, Clare Bosanquet took it from Romania and she gave it a modern twist. These ‘magic’ decorative rolls (worldwide) are sold on The Painted House website and the photos come from there. 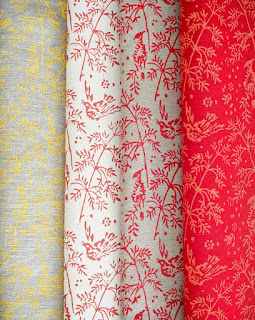 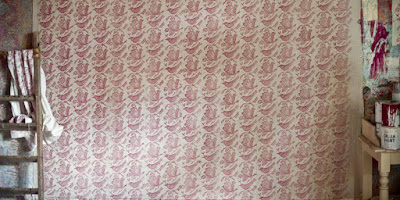